Evening all,
After months of speculation, the inevitable has happened. As much as I hoped we would stand our ground and not sell to a rival, Arsenal.com have confirmed that terms have been agreed for the sale of Robin Van Persie.
“Van Persie will travel to Manchester on Thursday in order to agree personal terms and complete a medical ahead of the proposed move.
Further updates will feature on Arsenal.com in due course.”
It clearly isn’t the outcome everyone wanted but it is certainly one that was foreseeable and unavoidable following the outburst statement released by Robin Van Persie just five weeks ago. Although I would rather he was sold abroad or made to see out his contract, it is a decision that is understandable given the reported £24million fee.
The transfer is subject to personal terms and a medical and whilst the latter may give us a surprise I am under no illusions about the former. It has been widely reported that Robin Van Persie will be paid around the £200,000 a week mark and he has almost certainly already agreed terms with the club (in my opinion).
So expect to see him paraded in a Manchester United shirt tomorrow which will in all likelihood make me physically sick and the red nosed alcoholic look delighted.
My personal feelings aside it is a move we were expecting and in many ways have prepared for. The signing of Giroud confirmed to many that the now infamous meeting had not gone to as planned from an Arsenal perspective and Giroud seems a player that would play well leading the line.
Where do we go from here? Do we go out and buy a striker to replace him? To be honest that would be nice but I cannot see that happening in all honestly. Not unless we can also sell at least if not both of Park Chu Young and Chamakh. I sincerely hope neither is expected to help solve the burden of goalscoring as you cannot replace the best striker in the premiership with utter rubbish. It is pointless. There are murmurs of Athletic Bilbao’s Llorente which I would be delighted by but cannot see it happening due to the near £28million release clause.
Either way, expect a lot more business, both incoming and outgoing between now and the end of August. Strangely despite what can be seen as a colossal set back, I still feel strangely optimistic, even by my standards, about the season ahead.
What of his legacy? There is none. He went from near legend to Manchester United player. He has been around the club long enough to know what this move would mean for him with regards to the fans. In spite of that and regardless of the reason, Robin Van Persie is and will forever be remembered by me as a United player and nothing more.
As a parting gift, and something to remember the 8th highest scorer in Arsenal’s history, here is an amazing picture going around twitter highlighting the integrity and honesty of our “captain” : 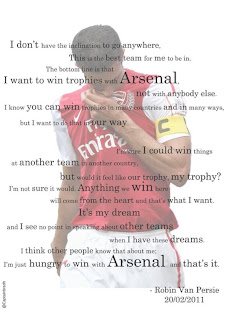 Great work @captainbradh
As a final point, I foolishly paid an arm and a leg for these trainers and I think I may burn them. Just a lesson for all you impressionable people out there. 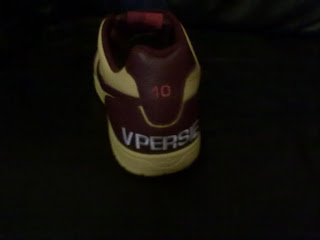 Oh well, onwards and upwards.
Arsenal is bigger than any player.
Come on you Gooners!!
GoonerVerse.
Posted by Goonerverse at 20:54