The Transfer Exodus Begins: Van Persie to United and Song to Barcelona?

Well the euphoria that surrounded the club following the arrivals of Podolski, Giroud and more recently Cazorla is seemingly diminishing day by day as the media, and that includes us bloggers are intent on ruining the mood. The feeling of optimism is vanishing before our eyes and is being replaced by a veil of uncertainty amid the rumours of two of our most important players heading for the exit door.
The saga of Robin Van Persie has been about as pleasant as a cheese grater to the balls and quite frankly I am growing quite wary of the whole situation. I have made my feeling quite clear on the situation in the past but in short, we cannot let him go to a direct rival, it will certainly send out the wrong signals at a time where there is some positivity around the club.
The reason the issue has reared it’s ugly head again is that the Manchester Evening News (the same paper that confirmed they were on the verge of signing Lucas Moura) yesterday announced that the Robin Van Persie saga could be over as United could closethe deal overnight.

“That leaves the Reds at the front of the queue – and M.E.N. Sport understands van Persie could jet in to sign as early as tonight.

The targetman, who turned 29 on Sunday, was photographed training with his team-mates on Monday in Germany where the Arsenal squad are currently on tour.

They take on FC Cologne on Sunday but it is unlikely van Persie will still be a Gunners player by then.”

Despite the assertions it seems that we are rightly playing hardball with United. We should under no circumstances sell one of the best strikers in the world cheaply to a rival. The same publication has today declared that the signing has stalled. Here is what Ferguson had to say:

"We have made a bid and they've been trying to negotiate with other clubs I don't have a gut feeling on it at the moment, I must admit. We're not getting any breakthrough with Arsenal. It's difficult to say why they're operating this way. I don't know what their thoughts are because they're not giving anything away."

It is not “difficult to say why they’re operating this way”, in fact I would say it is quite simple; we do not want to sell to a rival in an ideal world.
By the same token, I am not saying we are not going to sell him, if someone makes an offer that essentially offsets the transfers of Podolski and Giroud I cannot see us turning it down regardless of where the bid comes from.
It makes one wonder though, what will the legacy of Robin Van Persie be? He was heralded as one of the best Captain’s in recent years with many fans feeling we finally had a captain that understood Arsenal as a club. He was after all an Arsenal fan as a child. 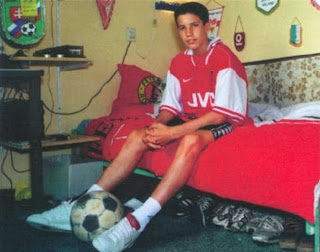 One of us almost. However I cannot imagine anything but negativity heading his direction and instead of becoming a club legend, which he actually could become, he will go the way of many a villain before him. Never in a million years did I picture this last season.
The other bit of news rumour which seems to be extinguishing the glimmer of hope Arsenal fans have is the apparent imminent departure of Alex Song according to The Mirror. At first I did not give this much thought or energy, dismissing it as a wild rumour. However, seeing the Barcelona team line up to wax lyrical about our player yet again, you can’t help but feel like we have seen this before. Firstwe had Sergio Busquets talking to ESPN:
"Song is a very good player - young, a hard worker, with lots of physical power... Barca lose a lot without Keita, both on and off the pitch. He was a much-loved player who gave us a lot of physical power. Another player in my position would be welcome, but either way I will keep working hard to win a place in the starting team."
And more recently Andres Iniesta has joined the party:

"He's a prodigy, I don't know how many years he's been playing but he isn't a discovery from yesterday. He's a good player and I've seen in a couple of publications that he could be joining our team. If he comes here it's because he has the ability to play here, no doubt."

The situation as I understand it seems to suggest he is lower down on a list of players they are looking to buy with the priority being Javi Martinez but are keeping their options open.
This would certainly explain our interest in Nuri Sahin of Real Madrid so there may be some truth to this but I would not expect anything to happen immediately or even this transfer window.
So as you can see, despite the intense media speculation from the likes of The Sun, The Mirror, The Mail and many blogs I cannot see anything imminent to ruin the optimism but these are situations certainly worthy of keeping your eye on.
Enjoy the rest of your day and a reminder that the GoonerVerse fantasy league is due to start once again. There are no prizes just bragging rights up for grabs so make sure you sign up to be the best.
Fantasy.premierleague.com - 725369-182756
GoonerVerse.
Posted by Goonerverse at 12:30