In Arsene We Trust! Do we have any choice? Piers Morgan Vs Frimpong...

Another Monday morning following a weekend of scare mongering in the media regarding anything Arsenal. Arsene Wenger’s future was questioned following a spirited but disappointing defeat to Liverpool and he unequivocally came out in defiance. Wenger is here to stay. That is until he gets fired which some people think may be a matter of time. I think people are getting carried away. This team is not ready for the fight ahead but this is not a situation that is irreparable. It is easy for any on the outside to dictate how he can fix the problem and in all honestly; us fans are probably most guilty of this.

There are people externally looking at us saying what needs to be done and how we can challenge again and to be honest none of it is helpful and none of it in actuality makes the slightest difference. Wenger and the board are the only people that can solve this and not a single person knows what they are thinking at the moment. I read an interesting piece suggesting there is a rift between the board and Arsene Wenger, while the piece raises some interesting points and could make complete sense is just pure speculation based on an unnamed source. Either way it is well worth a read.

All we can do is hope they can do something to alleviate the pain we as fans, the team as players and the club as an institution will certainly feel if we do not sort out some of these problems.

As expected the Nasri transfer is nearing completion which takes us one step further away from where we need to be. We are in such an injury crisis that even had the two players not be sold we would be very thin on the ground and struggle in these games. I am not saying we have the right ingredients at the moment but with 8-10 players out it is difficult to expect that the team perform to their full capabilities. I genuinely think there is something inherently wrong with our medical staff at the moment and this doesn’t help. It could just be lots of bad luck but we need to seriously assess the problems with injuries sustained, particularly in the past three years. To have 8 players injured is an unbelievable number yet is completely believable given our history with injuries. I cannot believe it is just down to bad luck and personnel. There must be something in the training, the preparation or the treatment which is contributing to these injuries.

We certainly have reason to be fearful but at the same time we should not jump the gun. We have shown patience with Wenger for these past few years and I would argue that we are not in an entirely different position to many of the other seasons that have preceded this one. The make up of the team, when fully fit is not far off the level of last season. In fact it could be argued on these showing so far that the team has seemed more organised, one of the main criticisms from last season. We start the season for the first time in years with a goalkeeper fit to wear the shirt. We have essentially replaced Nasri with Gervinho and Ramsey has replaced Fabregas. We have lost a lot but is it enough to not challenge when compared to last season. The worrying this is that others have strengthened around us. Never before has there been a season where everyone around us has been so active all at once. It sounds like the spurs are likely to be very active this week as well. We have just over a week to make a real statement of intent and to ensure we do not fall behind. I have faith but this faith could be proved to be misguided over the coming week or so. It is clear to me that fans would be satisfied with just anyone. I on the other hand do not want to become a club that second rate stars come to when our rivals are signing established internationals. There must be something though. I do not buy that there are not any players available that will not improve the club. I can think of one in fact that is joining a certain West London club for fees and wages which fall very much into our wage structure. Highly frustrating.

Arsene Wenger is not oblivious to the criticisms by everyone in the media. He is aware of what the general feeling is but insists he should be trusted and he is not feeling the pressure. He said after the game at the weekend that:

“We looked a bit naive in some situations, as well. But we have shown a great spirit and we were really unlucky. I don’t feel we deserved to lose the game. We will buy. People feel I’m stubborn. I’m not. I just want to do the best for the team and buy the right players. If I have shown one thing in the last 15 years, it’s that I’ve brought good players here. We will bring as well experienced players. People say “buy” but it’s to buy the right player which is difficult. We have bought players — Gervinho, Chamberlain, Jenkinson, Miyaichi — and you will see during the season they are top quality."

He is clearly feeling the pressure at the moment despite his best denial, as he feels the need to justify his actions consistently, which is something he has not felt the need to do for the majority of his career. He still fails to acknowledge certain things which anger the fans but this would be music to most fans ears. I just hope he delivers on these promises.

In lighter news there was a comical three way war of words if you can call it that between Piers Morgan, Emanuel Frimpong and Jack Wilshire on Twitter. It was petty and proved Piers to be the disgusting creature he is. Look at the pictures below for further details: 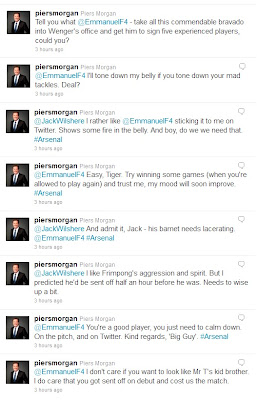 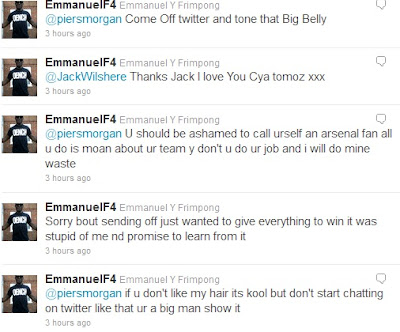 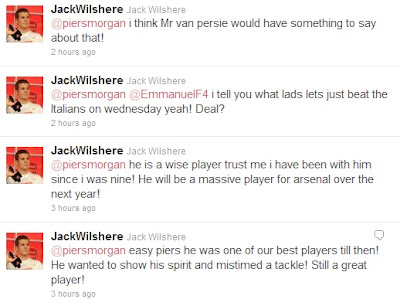 Now I don’t know about Piers but this is one person I would not want to antagonise. Be afraid Piers, be very afraid!

In other news we have us being linked with Matt Jarvis from Wolves. I find this a bit difficult to believe given the super quality comments. Also Riccardo Montolivo, has been linked with us again but not finding anything the media says believable. Aside from these little tales there is very little aside from our impending doom and demise in the news.

This could be the most important week in Wenger’s career. Here’s hoping that it being better than the last few.