An introduction to Alex Oxade-Chamberlain 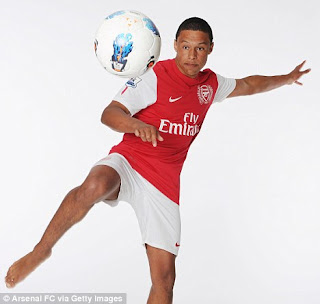 Our new signing was born in Portsmouth, Hampshire and joined the Southampton Academy at the age of seven. He made his professional debut on 2nd March 2010 aged just 16 years 199 days, to become the club's second youngest ever appearance maker behind Theo Walcott another Arsenal star.

Chamberlain made his first competitive start on 10th August 2010 against Bournemouth in the first round of the League Cup. It was in this match, his first start that he scored his first senior goal.

A fantastic record for a 17 year old it must be said. I know the league is nowhere near the quality of which he will be competing in this year but a great start to a promising career none the less.

His role in our team this year will surely be a support role. He will be eased into the team with domestic cup duties as well as potentially being deployed as an impact substitution due to the pace he possesses, much in the way Theo was first used. From my knowledge on the player I would say he is an assured player and looks far more comfortable on the ball then the person he is surely going to be compared to. He also looks far stronger on the ball then Theo and as such this has many Southampton fans saying he is farther along in his development than Theo at the same stage.

I am fully aware that it wasn’t the announcement we wanted but we should still support a fantastic (and English) new talent which may come in useful for the coming season let alone many in the future.

So here is to one of many announcements this week! The next probably being the signing of another young winger so let’s hope you do not panic too much!