Udinese vs Arsenal Preview: The most important game of the season!

"Imagine the worst situation, we lose Cesc and Nasri, you can't convince people that you are ambitious after that"
In shocking news, Samir Nasri completed his proposed move to Man City, despite his being public knowledge for the majority of the transfer window, the shocking news is that there are still people shocked by it. You must have been living under a rock for the entire summer not to have known that this was inevitable but amazingly there are apparently those that didn’t. One thing is clear Arsene Wenger certainly didn’t know about it.
I don’t want to spend too much time on him but what I will say is that we have lost a player of undoubted ability and I know people have said it was only a 6 month patch but what is important to note that this patch was in the absence of Fabregas and most of his success came in that role. In this period people were talking of him as one of the top in the world and whilst this couldn’t be maintained he showed glimpses of brilliance. At the same time Samir Nasri's last assist in the Premier League was in October 2010 at the Etihad Stadium. This along with our win percentage being higher without him suggests it is not the end of the world. At least not until he has not been replaced.

Interesting to see is Frimpong's take on the situation: 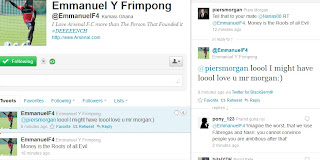 Don't know if he will get in any trouble as this certainly isn't "The Arsenal Way" but he has endeared himself to fans. Even after this he quoted Wilshire's "good luck tweet" and annotated with a "PFFFF come on Jack"


It is with that sentiment that I will say it is absolutely imperative we replace him. £20m + £35m + £24m = Lot’s of money to sit on. There is lot’s of speculation and much of the players linked apparently hinge on the result tonight. We need lots of players but there are rumours that Wenger is not allowed to spend, but then there are rumours he is happy with the squad, but then there are rumours we are looking at half of the French league. Nobody knows what the truth is but regardless of anything it is imperative we strengthen the squad because as it stands, when fully fit we are looking at a matchday squad of:
First XI: Sczeczny, Sagna, Kocsienly, Vermaelan, Gibbs, Song, Ramsey, Wilshire, Gervinho, Walcott, Van Persie. Not bad by any means but what do we have to look to on the bench if things aren’t going quite our way.
Bench: Fabianski, Jenkinson, Djorou, Diaby, Arshavin, Rosicky, Chamakh. Again does not look too bad with the exception of Chamakh up front and Djourou at Centre back it is not a bad start. However this is Arsenal and when are we ever fully fit. We will invariably have between four and twelve players out and this is where you see the huge gaps such as they are now. How they would benefit from even two or three top class players.
We need to do something to ensure players want to join us at the same time as keeping the talent we have. The problem is we are entering a vicious circle which will now be difficult to break. We are in a position where our best players want to leave, this will mean other players may be more reluctant to commit, meaning there is an uncertainty around the club which new players would not like to join. To solve this we need to act, quickly, efficiently and aggressively. Like I said on Monday, this is the most important week in Arsene Wenger’s career and it is not starting brilliantly. Let’s hope this changes tonight and continues in emphatic fashion for the remainder of the transfer window.
Also it has been decided that Arsene Wenger’s pathetic Uefa touchline ban decision is delayed. This is the only boost we have had and hopefully this will lead to a more cohesive display. We have to be honest, whatever there stealth communication techniques were, they just weren’t working. Watching the perplexed face of Pat Rice when he turns around was hilarious at the time. I just had no idea the repercussions would be so pathetic.
Arsenal Vs Udinese Preview
We hold a one-nil advantage which is crucial. We have the advantage of not only being one up but having not conceded a goal at the Emirates increases our chances of progression greatly. Despite the host of negativity that followed the result the important thing was the win and the clean sheet. They would have accepted that before hand but why that caused such a furore in its aftermath is indicative of how un-arsenal like the performance was. Despite the lack of possession and control we still carved out a number of opportunities which should give us huge encouragement.
We must approach the game in the same way would any other. We need to get a hold of the game keep possession and dictate the pace. Our midfield trio needs to be less flat and try more inventive passes. This will be difficult given the level of personnel unavailable but not impossible.
Injury news for the game is a bit unclear. Many sources over the past two days have suggested that Wilshire may hand us a boost with his fitness but other sources were suggesting a further two months out due to a set back. Given my past experience with Arsenal injuries, unfortunately I felt more inclined to believe the latter of the two and guess what? We still have Squilaci, Diaby, Koscienly and Gibbs out and as such will really have to dig deep. Rosicky is back in the squad so that is a bit of a boost.
I expect the starting XI to consist of; Sczeczny, Sagna, Vermaelan, Djorou, Jenkinson, Frimpong/Rosicky, Ramsey, Song, Arshavin/Walcott, Gervinho, Van Persie. Not a bad team by any means and one I would expect to be able to win the game. The problem will be if all does not go according to plan then will anyone of the players on the bench be able to step up and make themselves counted. The real answer is that nobody knows as many are untested.
I predict a tense 1-0 victory with plenty of gut wrenching moments so enjoy it ;)
Come on you Arsenal.
Gooners.
Posted by Goonerverse at 08:58