Morning to all the disgruntled and optimistic Gooners alike.

Today, there is a competition of sorts. You must find my tweet and ensure that it gets 300 retweets along with this blog to get 500 visitors in order to have the chance to win an Arsenal Retro Tee. I will pick someone from that has retweeted randomly and send them the T-shirt. 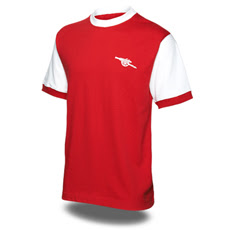 I know it isn't much but they are quite nice so I'd say it is a nice bonus to check out Arsenal news and views which you may do anyway.

Enough of that because I have a public service announcement. Everyone can now rest safe knowing the Spanish foreign minister is no longer going to force through the extradition of Arsene Wenger for holding a Spanish national hostage. I can confirm that the hostage situation has been resolved as they have paid the ransom. We have reduced our demands slightly but with around £35m to spend we have issued the safe release of the best treated hostage known to man.

Despite the negative spin by the Catalunya, it was refreshing that Cesc did stick up for Mr Wenger and the club, a little:

"I will never forget what he has done for me. I couldn’t even talk when I wanted to say how grateful I was for what he has done to me, so I had to send a message afterwards saying thanks for everything... The biggest regret I will have in my career will be not to be able to lift a trophy as Arsenal captain."

So with this finally to bed I hope we can all move on now. Of course I am upset but what I have heard and seen from some Arsenal fans goes way beyond the sadness I am feeling. It was like mass hysteria everywhere I turned to; Twitter, Facebook, you know, all the places that people hang around these days. I was, to be honest quite shocked at the fury this had caused amongst fans. Especially when we knew this was going to happen for quite some time. If the selling of Fabregas wasn’t enough, there was a series of incidents which worsened the mood, something which you wouldn’t think possible if you heard some comments.

First there was the BadgeGate scandal. 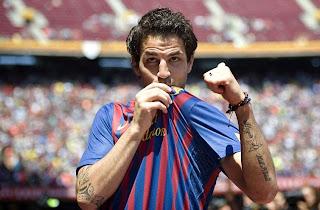 Then, came the return of the tweeter, who we all thought was lost forever in a web of deceit and treachery. Samir Nasri clearly took offence to the treatment that some of the fans dished out to him up at Newcastle. While I would not condone the chants, it is clear that seeing as his wages are essentially paid by the fans and he has disrespected us than we as fans are entitled to say what we want. In true hypocritical style from any self respecting footballer, I imagine he was inspired by Joey Barton, he tweeted:

"I heard what the fans were singing about me on Saturday and it is really disrespectful because I’m still a arsenal player."

This caused a barrage of abuse to be directed his way and am quite surprised it didn’t make bigger headlines. I personally was more offended by the use of “a arsenal player” instead of “an Arsenal player” but that’s just me.

Funny how he doesn’t find it disrespectful to agree a contract verbally and then refuse to sign it. Then to try to force your hand further in a tweet directed at the fans. Hmm. Maybe I am overly suspicious of the motives but it screams as "Let me out of here!"

Despite Wenger’s assertion that Nasri would stay, I expect this little outburst makes that all the more difficult. He is quickly becoming even more unpopular than our Togolese friend. Like I said yesterday we just need to get on with it and bring in quality to replace them. I cannot imagine Nasri being here by the end of this transfer window so let’s hope we can speed up the process and even get a replacement in by the weekend. Likely? I think not but as you saw from my post, I like to dream.

Which brings us to the most important matter of the day. Yes, more important than someone feeling upset because he has been sworn at; Udinese.

We are going into one of the most important games, one that if goes wrong could define us and how we are seen in the media, by players and manages for the coming season. Forget the financial implications, if we do not qualify for the Champions League proper than we are in a far shittier situation than any of us, even the ones screaming bloody murder, had ever envisaged. Let's face it; we are going into this game with a back drop of shit. Captain left, many suspensions, injuries and a set of fans almost sick to the stomach with the club.

I understand the frustrations and I know by me saying this it will make no difference to any of the fans going tonight but please get behind the team. They need us more than even. We are going to be without key players and I expect it will be frustrating at times but despite everything else we need to do our job which is support. Nothing else for that hour and a half come 7.45pm.

If we look at tonight, we are likely to start with

There are murmurs that Bendtner could play a part so maybe either on the wing or as an impact sub if things aren't quite going to plan. Ideally we can get through this with ease but since when did we do that? If the defence continue their fine start to the season that should be enough to ensure we do not lose at a minimum. We may even go with two DMs which I hope isn't the case but with the injuries it may not be an option. I predict a 2-0 win today, not least because I feel the players will feel like they have something to prove.

Transfer news is a bit thin on the actual news front. Murmurs of a real bid for Cahil have resurfaced. I won’t hold my breath though. Joel Campbell has still not signed, neither has Jadson and nor can I see anything happening today. Here's hoping to a surprise.

With that, I am off. Feeling the start of season buzz all over as this is the first home game of the season. Good luck with the competition and I hope there is a winner.